Frank Capra’s classic film, It’s a Wonderful Life, tells a heartwarming story about the impact that a life well-lived can have on others. Viewers are introduced to George Bailey, the reluctant successor to Bailey Building & Loan, started by his father as a way to help working-class citizens of fictional Bedford Falls, New York, have decent, affordable homes of their own. Bailey’s nemesis, wealthy banker Henry Potter, is what we might call today a “slumlord.” He rents poorly maintained properties at exorbitant prices to folks who are held captive by his rental scheme. Bailey Building & Loan becomes the antidote for these Bedford Falls workers—a way for them to own their own homes and escape Potter’s high rents. The subplot that runs beneath the entire film is Bailey’s unswerving—although initially unintended— commitment to helping the working-class people of Bedford Falls.

When Potter complains that Bailey Building & Loan is lending to “risky” (translate that as poor) homeowners who really can’t afford to own their own homes, Bailey replies:

What’d you say a minute ago? They had to wait and save their money before they even ought to think of a decent home. Wait? Wait for what? Until their children grow up and leave them? Until they’re so old and broken down that they…Do you know how long it takes a working man to save $5,000? Just remember this, Mr. Potter, that this rabble you’re talking about…they do most of the working and paying and living and dying in this community. Well, is it too much to have them work and pay and live and die in a couple of decent rooms and a bath?

It’s not lost on the film’s viewers that the name of the rental neighborhood owned by Potter is called Potters Field. A potter’s field is the burial place of the unnamed, the unknown, or the indigent. And in the context of the film, Potters Field is indeed a burial place where the hopes and dreams of Bedford Falls’ working-class residents have come to die. With high rents and low wages, renters’ opportunity to save enough money to get out of Potters Field seems impossible.

Is it too much to have them work and pay and live and die in a couple of decent rooms and a bath?

The rising cost of rent, coupled with still-increasing costs for food, gas, and essentials, and a workforce still struggling to get its bearings after Covid-19, have left more Americans homeless or fearful that they will lose the roof over their heads. Already, agencies serving our neighbors experiencing homelessness see more and more families seeking temporary shelter. And high housing prices, coupled with increased mortgage interest rates, have placed home-buying out of reach for even more Americans, making rentals even more competitive and critical. High housing costs beg the question of our moral obligation to provide affordable, safe housing in our cities so that our workers are not displaced.

Out-of-Reach 2022, published by the National Low Income Housing Coalition, reports that the national average monthly fair market rent for a two-bedroom rental is $1,342. For that rent to truly be affordable to renters, market wages for a full-time (40 hours/week) job must be $18.30 in Tennessee, $20.97 in Georgia, $34.33 in D.C., and $37.72 in New York. Yet, hourly wages advertised recently for nursing assistants in Atlanta were less than $15, and hourly wages advertised recently for building maintenance workers in Washington, D.C., were $23. Salaries are not keeping pace with inflation, even as some employers offer incentives to draw workers. As generous as it may sound, a $20 hourly wage for a janitorial service worker in Memphis isn’t enough to make ends meet when the work schedule is only part-time. One worker’s decision to take a $14/hour warehouse position that offered a 40-hour work week was practical. It paid more. She discovered, as did Maid author, Stephanie Land, that working “25 hours a week as a professional cleaner…is not enough to pay the bills.”

Scholar and demographer Jennifer Sciubba notes in her book, 8 Billion and Counting: How Sex, Death and Migration Shape Our World, that more and more workers are being pushed toward service industries—and, accordingly, urban centers. But the growing shortage of affordable urban housing—exacerbated by older and poorer neighborhoods in cities being gentrified or taken over by non-local investors—means there is nowhere for these service workers to live.

High housing costs beg the question of our moral obligation to provide affordable, safe housing in our cities so that our workers are not displaced.

The housing crisis isn’t just a crisis for the working poor. 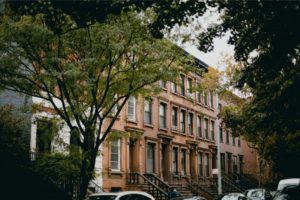 photo of Harlem block by Rachel Martin for unsplash

The Reverend Patrick Williams is an Episcopal priest serving Harlem’s St. Martin’s and St. Luke’s Episcopal Church, two congregations sharing worship and with a long and rich history in economic and educational empowerment. Patrick and his wife, Natalie Harvey, a teacher, met in New York City. After living for a few years in Williams’ home state of Tennessee, where the cost of living was considerably lower, they decided to move to Harlem with their two young children. “We want to be part of Harlem’s resurgence and renewal. We want to be part of what makes this a great community,” Williams said.

The first apartment they chose in Harlem proved to be too noisy for a family with young children. They’d hoped that the second apartment would be a long-term rental in a rent-competitive area. But their landlord’s plans to marry and grow his own family meant that he needed to move from his one-bedroom apartment in the walkup into the Williams’ larger, three-bedroom apartment. Their lease, the landlord told them, would not be renewed. Now searching for their third apartment in two years, Patrick and Natalie join the growing number of New Yorkers already squeezed by inflation who worry that rising rents will ultimately outpace their ability to afford to live in the Harlem neighborhood they serve. The concern is real: Crain’s New York Business reported that rent growth outpaced wage growth by 23% in August 2022, marking a 14-year-high in the gap between income and rent. After walking his young daughter to school, Williams grimaced at the $8 price of what he hoped would be his morning breakfast—coffee and a croissant. “It will be coffee and muffins at home for me,” he sighed.

Too many of our cities have become potter’s fields of poor quality, exorbitantly-priced rentals for American workers. But safe, affordable housing for our neighbors who serve us all needn’t be an unaffordable reality; rather, it should be a public policy priority. The business, public education and social services sectors together have many resources to deploy to restore hope to workers in our nation’s largest cities.

Too many of our cities have become potter’s fields of poor quality, exorbitantly-priced rentals.

Minimum wage laws must take into account the higher costs of housing in our cities so that workers are not priced out of and permanently displaced from major employment markets. Workers need jobs, and employers need workers. Partnerships and internships with local employers, and programs like the UpSmith program, through which employers sponsor workers’ training, can benefit businesses and learners alike, and can help ensure that employers have a solid pool of available workers from which to draw. Also, improved educational opportunities in our most underserved neighborhoods can help equip workers to earn higher wages – and help close the disparity gap in our communities. Low- or no-cost two-year college or vocational school opportunities already exist in many communities.

Now-empty commercial spaces can be converted into supportive transitional housing for working people who have already been displaced, to allow them time, structure, counseling and most importantly, stable shelter to get back on their feet. Charlotte’s Moore Place, with its wrap-around services for mental health care, job placement, and budget counseling, has become a model for supportive housing that can help people who are struggling to be housed access services and find stability. California’s Homekey project has become a model for creating thousands of affordable housing units from hotel properties that have been vacated by the fallout from Covid-19, in far less time than new construction would take. Combining parts of both initiatives could result in affordable housing with supportive systems in place to help essential workers find their place in our urban centers and access the many available jobs there. Employers still struggling to find workers might consider the possibility of becoming investors in supportive housing plans that give employees housing and stability.

And, to help those who are struggling to put food on the table, community gardens and pop-up food markets can bring fresh produce and other essential foods into food deserts, helping to ensure better health outcomes until such time as investment in adequate grocery stores can be accomplished in all of our neighborhoods. The arrival of grocery stores can also mean jobs—and income—in underserved neighborhoods, and a means by which to help propel underserved neighborhoods out of their blight. Churches have already stepped into the gap in many areas, where community gardens are helping neighbors explore healthy new foods—and certainly, additional possibilities for neighborhood investment exist.

Churches have already stepped into the gap in many areas.

Our large cities are made better and richer when the people who work there can be part of them. When we work together to dismantle the Potters Fields in our own backyards, we restore the hope of affordable housing for all.

Fictional character George Bailey may not have initially understood his father’s commitment to housing security, but it takes very little to help him see the value of investing in the neighbors who do most of the “working and paying and living and dying” in the community. May his resolve inspire us all in the work that lies before us.