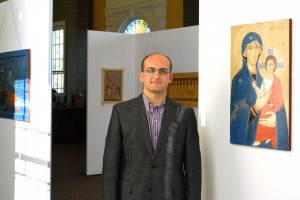 Philip Davydov at the exhibit, “The Living Tradition of Icon Painting,” at Virginia Theological Seminary

From October 9 to November 20, 2015, the Virginia Theological Seminary in Alexandria, VA hosted an exhibit titled, “The Living Tradition of Icon Painting.” This exhibit featured the work of Philip Davydov and Olga Shalamova, a husband and wife team living in Saint Petersburg, Russia. While he was in the United States for this exhibition, Elisabeth Kvernen had the chance to interview Philip about his work as an icon painter within the Russian Orthodox tradition.

What three or four things are absolutely essential for anyone to know about the history and practice of icon painting? First, icons are meant to be understood within the context of Christianity, and can be best understood by viewers familiar with this context. They cannot be fully understood only as art, or as a set of pictures.

Second, icons are created as “windows to heaven”—they were never meant to be portraits. Instead, they are called to indicate, to give an idea or a hint about what they represent. These visual indications will help the viewer focus on prayer.

Third, the variety of styles, mediums, and techniques testifies to the fact that iconography developed as a living visual language intended to share the Christian faith and its values. This art form can and has changed over time, to better correspond to the needs of the church and the contemporary life of faith.

What differentiates icon painting from other religious art? The styles and forms of icons throughout history have changed very much. Some icons were very realistic (especially early Christian images) and some were more abstract, but overall we can say that they were images made for prayer. They were created to facilitate the path from the image to the First Image—that is, God. Icon painting was traditionally considered to be a part of the liturgical space of the Christian church, and the rules of this space still apply, whether an artist is creating a little icon for use in the home or a huge iconostasis for a cathedral.

Icons are created as special tools for meditation. The iconographer has certain responsibilities, since these images are made for a concrete goal, with concrete requirements. For example, an iconographer should not include content for personal or emotional reasons (Lossky and Ouspensky, 1982), nor should he or she include anything that may invoke a sentimental, sensual, or psychological interpretation or response. The iconographer should avoid adding these qualities to the icon, in order to keep the beholder’s mind focused on prayer. All artistic decisions made by an icon painter should follow these requirements, since every image is intended to serve the whole church, and to be a means of encountering the face of holiness.

As creators of this visual language for sacred church space, iconographers have developed the following principles:

In icon painting the status of the icon painter—his or her state of prayerfulness, for example, or fasting—traditionally, at least, is considered to be an important part of the process of icon painting. Can you say something about how your own faith, and your practice of faith, informs your work? Just a couple of days ago, an Anglican friend said that the Orthodox understanding of spirituality is not about particular practices, but about transforming the whole human life to convey spiritual principles. We read in books and articles about our medieval colleagues, who fasted, prayed, and kept other disciplines as a way of getting to a state of mind and soul where their choices were more spiritual than material. The composition and colors in medieval sacred art astonish us, not only because these iconographers were great artists, but because we can see that they used their professional skills and abilities to promote spiritual values in their images.

So what do Olga and I do to make our images spiritual? We do our best to find time for individual and corporate prayer, but we do not fast, as we consider thinking of food too much to be similar to an obsession. On the other hand, we believe that since food or drink nourishes and influences the human body, it is our responsibility to keep ourselves sober and sensible, in order to be able to do our work properly. And doing it properly does not mean praying without ceasing, but rather being consciously able to make sound decisions and responsibly perform all the necessary activities related to icon painting with the highest possible levels of creative tension and discipline.

Both Olga and I consider iconography to be a very special form of spiritual visual art, which can only be performed by a faithful and practicing Christian who regularly attends liturgical services. We consider this work to be a ministry, and try to embody Christian values through it—both in regard to form, and in regard to the content and context of the image. To answer this question we have to be very careful to define “following the tradition,” since this phrase is used so widely. The most common understanding of “following the tradition,” which around 95% of present-day iconographers adhere to, is that an iconographer is able to reproduce the works of his or her predecessors with great technical skill and accuracy, but he or she does not make conscious revisions to the work (in size, proportion, or composition).

For our predecessors, on the other hand, it was traditional (i.e. normal, or usual) to adjust the size, proportion, composition, colors, and other properties of their icons to fit the contemporary context. Traditional iconography for them was rooted in the past, but contemporary in its form.

That is more or less the path we try to follow—we deeply care about remaining rooted in tradition, and we continue to study frescoes, mosaics, icons, and miniatures from the past in order to learn from them. At the same time, when painting our own icons and frescoes we do our best to make our images work well for our contemporaries, for their perceptions and their context.

For example, in medieval time the use of gold leaf denoted something sacred; in our time, it denotes wealth. So we substitute gold leaf for something else in our icons, because we do not want the icons to look like objects of luxury. And we have historical precedent for this; there are thousands of medieval icons with colored backgrounds, and no (or very little) traces of gold.

What do you think about icons being displayed in museums? I think it is wonderful that masterpieces from different cultures and time periods are preserved in museums, especially because many medieval icons would not have survived in their native churches. The climate conditions in a museum are usually much better than in a church, especially in the northern part of Russia. I am grateful to the restorers who saved many icons from destruction under Communism, and kept them in stable conditions.

The Icon of the Mother of God of Vladimir (“Vladimirskaya”), one of the most famous icons of our time, was discovered at the beginning of the 20th century. When restorers started to analyze it, they discovered that the original wood of this 12th century painting was already almost ruined by wood beetles. To preserve it for future generations, they brought it to a museum where it could live under perfect climatic conditions. It is kept in a climate-controlled glass case, in a chapel attached to the Tretyakov Gallery in Moscow.

I think museums play a very important role in the conservation of our spiritual treasures, and our task is to cooperate with them so that our descendants may see what we see.

You also teach icon painting. Are people outside of the Orthodox Church interested in learning this art form? If so, what do you think is the attraction? Generally speaking I would say that people from western Christian denominations are interested in learning iconography because they see it as a wonderful visual aid for prayer, and they wish to learn how it works. Some people come to learn the technique, some people want to paint only one icon in their life, as a spiritual journey; but all those who come with serious intentions come because they are struck by the spiritual power of medieval icons.